I wrote a weird little tool to draw stuff with code. It was fun!

I decided a little while ago to build a tool for my leatherman to generate images. It’s inspired by the image drawing in PICO-8. Let’s dive in!

Wiring the main body of the tool was pretty easy overall, I used the image, image/color, image/png, math, and github.com/yuin/gopher-lua packages in pretty straightforward ways.

Here are some screenshots of me getting it to work: 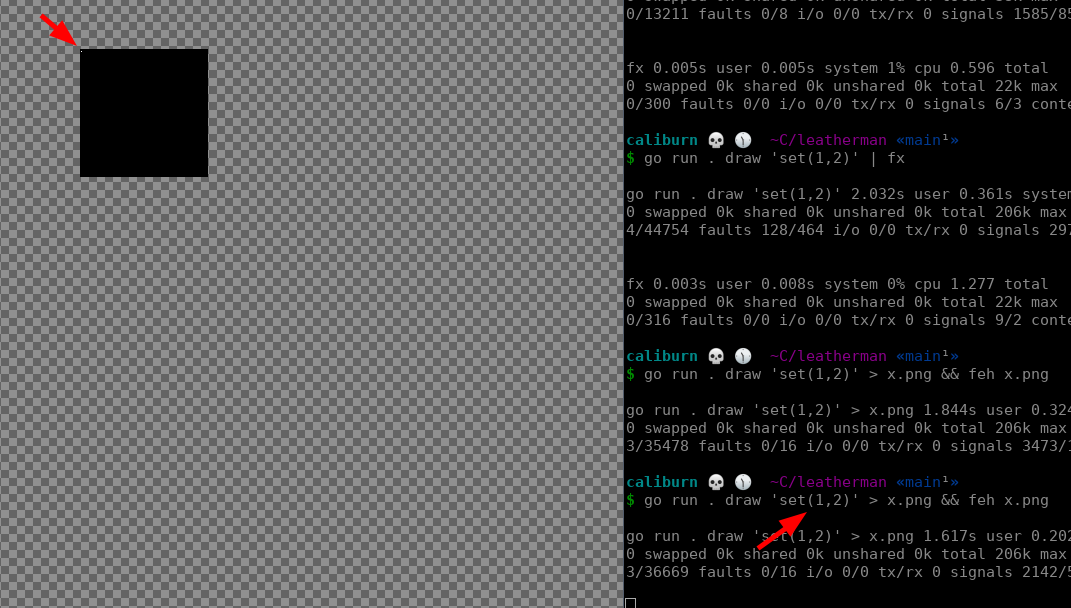 The main difficulties I started off with were massive performance issues due to terrible code! Let’s start with line. The following is the code I started with plus some comments to point out the egregious mistakes I made.

So I read the wikipedia page for Bresenham’s line algorithm. For silly reasons: I read it, understood it, and implemented an algorithm inspired by it but likely not quite as good as it could be. Here’s the new version, with some added comments to explain the improvements:

The next crappy code issue I had was drawing circles. Initially this was bad because my line drawing was really bad. I would have shown these screenshots in the previous section but they were in the context of circles when I was debugging. Here are a couple examples:

So the above is bad. It doesn’t look too bad, with just a couple notches out of the circles, but on my Raspberry Pi 2 it takes 14 seconds to render a small circle. Here’s my naive code, again with comments of some silly mistakes:

While I debugged line drawing, here are some buggy circles I drew: 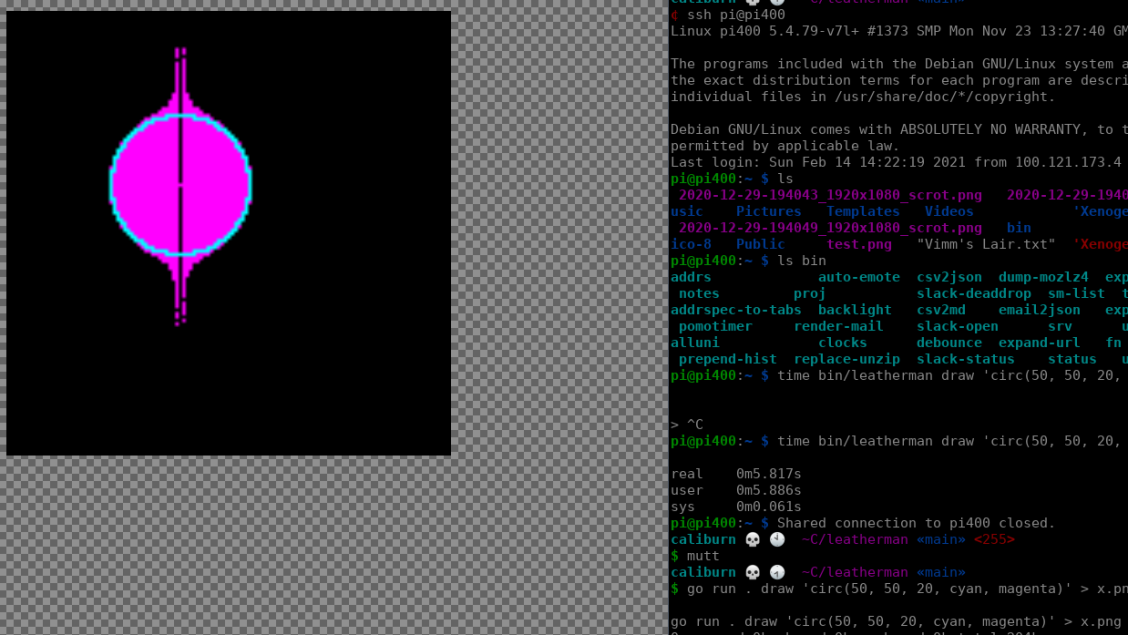 (I actually think the above looks really cool, and stored the code in a branch so I could reproduce it directly later.) 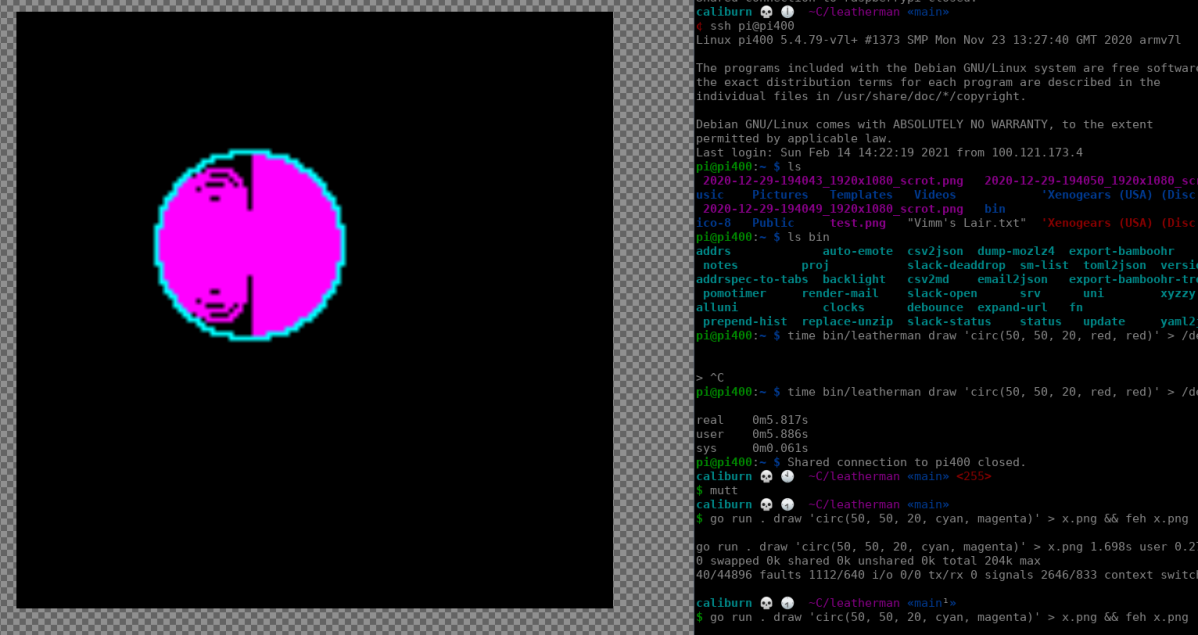 This was tricky to fix, but before I show you how I fixed it, I’ll show you the corrected algo, and a working image. 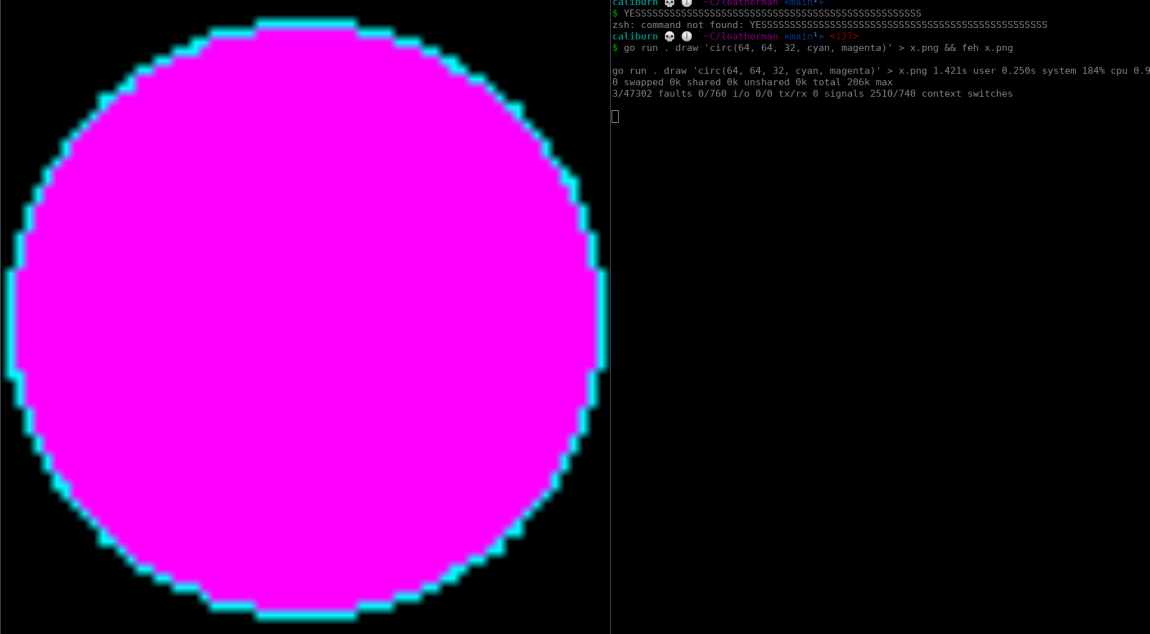 So the circle issues above were killing me. My friend Wes suggested that I generate a gif to allow debugging. So I did that! It was pretty easy. Here’s the code for the gif generation:

An important detail is that the LM_DEBUG_DRAW env var is a regular expression matching something related to what we want to debug. So at the time I was debugging this you could debug entire lines, for example, by setting it to line (or . to debug everything.)

So the first problem I had was that I was accidentally drawing around the circle more than once. This was perfectly clear thanks to my first gif:

(This gif seems to do nothing for a long time. This is actually a big part of the problem. It has many frames and loops forever, but a lot of the frames are subtle or literally do nothing.)

After fixing the duplicates loops, here’s a zoomed in circle gif:

When the image above is drawn, there is a related logline. Using that logline I was able to find one of the problematic lines. Rendering it made the problem instantly clear:

The problem is that with the better algorithm, we start at x1 and add 1 for each run through the loop. This means that if the slope is too high (or too low) there will be gaps, as seen above.

After fixing the line bugs I can draw a 360 degree arc (circles are special cased for the moment) and they look much better (though still clearly not perfect:)

After getting this thing mostly working, I started playing with it. I wired it up to discord so that any lua will get evaluated by the bot and become an image. This became very fun to play with in a kind of performative style.

Here are some fun examples, with code before the image:

My friend Wes came up with the following one:

This was very fun to build. There’s plenty that could improve. There are still some subtle bugs in the line drawing, which makes arcs look bad. I might write some tests and some benchmarks at some point. One major feature I think is lacking which is logical transparency, ie do not paint a pixel, (as opposed to painting a transparent pixel.)

got its second edition released. He wrote about it here. I am hoping to get a copy myself soon. I loved the first edition and think the second will be even more useful.

At the end of 2019 I read BPF Performance Tools

. It was one of my favorite tech books I read in the past five years. Not only did I learn how to (almost) trivially see deeply inside of how my computer is working, but I learned how that works via the excellent detail Gregg added in each chapter. Amazing stuff.